148. National Endowment for the Arts Thank You Story 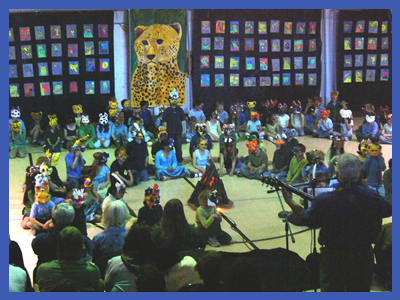 This is the 50th anniversary of the NEA and to celebrate they are publishing “Our Story” from their recipients around the country. With gratitude for their generous contributions to Talking Hands Talking Feet and Songs To Educate, here is our little story.

Every year since 2008, our company, Talking Hands Talking Feet has received generous grants from NEA for our curriculum based performing arts programs in Santa Fe schools, under the fiscal sponsorship of Partners In Education.

Here is the remarkable story behind it.

It began in 1996 in our Seattle living room with a group of friends who also had young children. We would often have family gatherings where we would play music and dance, sing songs and tell stories. The biggest challenge was finding compelling children songs that engaged the whole family and songs that opened doorways to new learning. So we started writing original songs with story and dance accompaniment. We soon realized it was a marvelous springboard of discovery into the natural worlds, the human body, language, geography, numbers and counting and the kaleidoscopic world of human beings.

Our parent friends loved these songs. So, in September 1997, in response to their enthusiastic encouragement, we opened our home to the public and started music, movement and story workshops for parents and children every Saturday morning. We called it Talking Hands Talking Feet.

We have always believed in and practiced the arts as a vehicle for natural education. This was how we raised our sons. If you truly wish to learn something of value, give it a form of expression! Start with the most fundamental of human arts – music, rhythm, movement, language, symbol, story and song. To our ongoing wonder, delight and discovery, parents and their little ones couldn’t get enough of Talking Hands Talking Feet.

Thus it began. It steadily grew year by year. We created a record label and produced our first albums. We moved from Seattle to Boulder to Santa Fe, always experimenting and expanding what was becoming a substantial curriculum of arts integrated educational songs.

In 2005, many hundreds of family workshops later, our youngest son’s first grade teacher in Santa Fe, New Mexico asked us to help with an end of school year performance which involved orchestrating four classrooms in a songful extravaganza. It went so well that the following year the teachers asked us to do it again, this time with our own original songs and that we would be paid to do it! So we developed our first thematic 12 week performing arts program for four 1st and 2nd grade classrooms called “In Tribute To The Earth”. Thus, Talking Hands Talking Feet curriculum based performing arts programs were born.

The range of content has expanded to 140 songs with movement and story accompaniment including inspiring lesson plans that help teachers bring subjects alive. The songs cover a diverse range of themes with a spirit of discovery, compelling humor and humanity; and now have personally touched the lives of thousands of young students.

This inspired us to share these arts integrated programs around the world through our online resource for teachers and parents called www.SongsToEducate.com.

It is remarkable how many children years later tell us how they love and remember the songs and the experience of learning through Talking Hands Talking Feet. We are so thankful to the National Endowment for the Arts and to New Mexico Arts for making this possible and reaching thousands of students in Santa Fe.

With value and gratitude,
Paul and Melanie Zeir