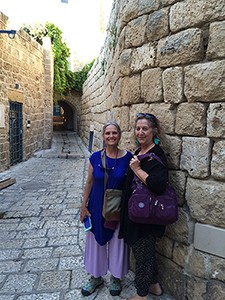 This summer we were invited to teach in Israel. The invitation came from a most special village in the Northern Galilee called Ma’ale Tzvia. The following story can barely touch the feeling of appreciation, love and honor we hold after having been given such a rare and beautiful opportunity. Nevertheless, it is offered here to our known and unknown community of creative educators around the world as a signal of strength and hope.

This story begins with our last night in Israel. We are in the ancient port city of Jaffa in a restaurant called Blackout. The waiters are blind and the chefs and staff are deaf and/or blind. We are there courtesy of Melli’s amazing dance teacher and dear friend, “T”. They had not seen each other since coming together to Israel from South Africa in 1976 to start a dance school. Yes, 40 years.

Our stories are threads in tapestries, made of light and sound, vibrancy, depth and dimension.

Here we were, eating the most flavorful, sensuous food in total darkness. There are many people in the room. You can hear them, feel them, smell them…but you cannot see each other. You cannot move without a blind escort. It was marvelous. So private and yet intimate; so freeing of visual inhibitions and yet helplessly dependent on the guidance of the blind, who navigate the sightless world with quiet grace.

We were told some people get nauseous when they first go in…a kind of vertigo and disorientation. Once you settle in and calm your inner lives and slowly adjust to the blackness, there are revelations available. You ‘see’ how the visual world dominates our experience and language; how our physical adaptations have made us visually biased creatures; how the visual world can be a distraction from the truth. Here, your other senses can get a ‘look in’. Here, your finer, subtler senses say “here we are, may we have a voice?”

Our visual centered perceptive matrix can be blind to the greater context and unseen community in which we live.

Imagine a world in which the full spectrum of senses, including our subtle senses…all engaged. Where instant judgment based on sight was put in check. The Blackout restaurant experience was just a fraction of a glimpse into the world of blindness and the grace and sensitivity of the blind. It caused such a wonder and wish to connect to a world of new perception not dominated by sight.

The eyes are windows to the soul. But they can also be instruments of instant judgment and assumption at the behest of maladaptive neural modes. I realized I am the one who is visually impaired, not those who cannot see.

May the light of the future open new eyes. 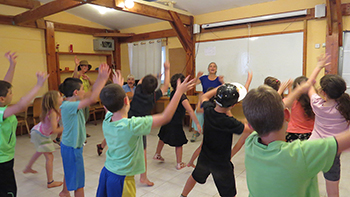 To the Hebrew speaking children we are “Pol ve Melany”. In the village of Ma’ale Tzvia, we are known better as ‘the Rainbow Train people’ than by the name Talking Hands Talking Feet.
40 Rainbow Train CDs came to the village in 2001, and mysteriously multiplied over the years. 15 years later, we met many teens and young adults who grew up to these songs. 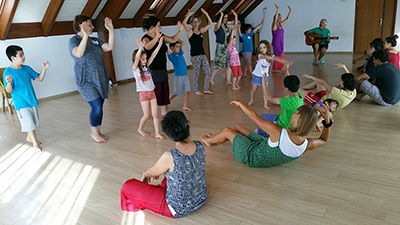 There were many touching moments throughout our workshops when parents would join in singing the songs that accompanied their early years as parents.

Here…2016 now, working for 12 days, we did 25 sessions in the village and 4 sessions in Kvar Saba outside of Tel Aviv, including 3 full day workshops for the educators. 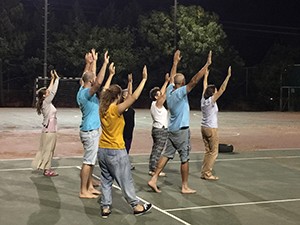 We searched for a word to describe the self-regenerative feeling that accompanied our time there. The best one that came to mind was “re-charge-a-thon”! 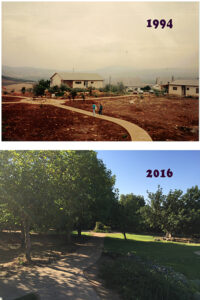 I woke up between 1 and 3 every morning in the first week. Ramadan celebrations crescendoed through the nights interspersed with the call to prayer in neighboring Arab villages. This, accompanied by the call of peacocks roosting high in the pine trees nearby, simply added to the mystery of where we were.

We visited Ma’ale Tzvia in 1994 and 1996. The growth and changes that have occurred in 22 years in the various ecologies, in the community, in the devotion of the people, in the feeling and attendance of a dedicated village way…is deeply inspiring and imbues every aspect of life there.

Then, there are the children… 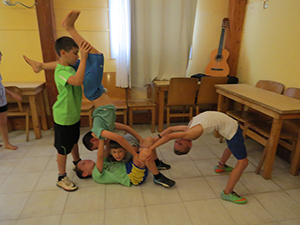 We were asked – How was it working with the Golden Education Template children and educators?

This was why we came. 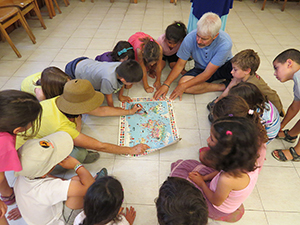 We have worked close-in with a lot of children over the years, nearly 6000 children…many ages, many schools, many teachers…But nowhere have we worked with children who were so clear mentally and emotionally. They are confident, passionate, kind, funny and incredibly tenacious, focused and inquisitive. I would tell a story and between every line, every idea, there were multiple questions. We would introduce a song and they would take it and run with it, bringing new intensity, depth and experience to it.

We feel so incredibly honored to have worked with these young lives in such a vibrant context. 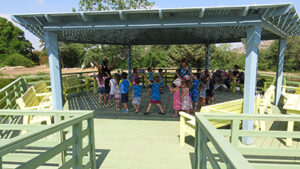 One of the phenomena that most struck me was to do with conductivity and translation. For the first few days we needed English to Hebrew translation for nearly every activity or song. I enjoy the back and forth of a bilingual process. It can be amazing, especially when you find a natural rhythm and cadence. But some translators interrupt the flow and fluidity of a process and it simply doesn’t work. It’s an art. 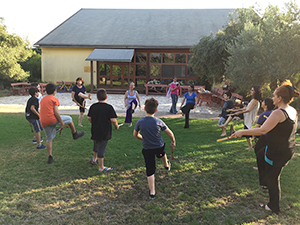 But the cool thing was that after 7 days or so we hit a kind of immersion threshold, and we noticed there was no need for translation anymore, even with the little ones. There’s a lot of contextual nonverbal communication in what we do…movement, sound, body humor, melody, many kinds of dance, story dance, talking hands…But there was something more to this sudden shift. It’s the magic of language transference through meaningful song, rhythm and movement.

It is working through the human design intelligence as the principal approach to learning.

The GET students do learn English through their curriculum and with some of the parents and teachers. But this sudden switching-on of their English language faculties and facility was because of the conductivity established between us all. Very, very special and rare.

Teachers make a school…whatever kind of ‘school’ it is. Over the years we’ve met some very gifted educators…amazing human beings, every one.

Israel takes the saying “It takes a village…” to a whole new level. The whole country is ‘the village’ raising its children.

It is a fierce love ever present in the surveillance of wellbeing in the children. Magnify that quality, add to it profound grace, humanity and a rare, throughout intelligence, and you begin to touch the feeling of the family ecology that is present in Ma’ale Tzvia. Amplify it yet again and you feel what is present in the gifted Golden Education Template educators.

For us, the privilege of working in this circumstance, bringing our gift and way to it, allowed a cross fertilization and new induction of enhancement and intelligence. We never expected this to happen. We create vibrant, relevant songs with movement-theater in a kind of devoted symbiosis with the children, parents and teachers. For it to be confirmed such is deeply encouraging.

Chapter 5 ~ “Hope is a verb with its sleeves rolled up.”

The weave of so many poignant conversations…stories within stories…what was spoken and what was not spoken…rings a resonant chord of hope. If it could be expressed in music, it would be a continuing threshold weave, not seeking to resolve, but ever opening new internal horizons…bringing profound settlement, hope and yearning all at once…

There are themes. As our dear friend T realized after having pioneered so much in the realms of dance and community and theater arts in Israel, that no one person can really claim the credit for innovation. We tend to identify innovations and virtuosity with this or that persona. But truthfully, new things happen because we enter a threshold of new perception permission that allows it to manifest. That involves the path-finding courage and passionate devotion of many seemingly disconnected and isolated endeavors. But the breakthroughs don’t happen in isolation…ever.

We know our community to be many points of light arrayed all over this tiny blue planet…We are connected by the finest of threads, made of substances both created and summoned by the same reason why, ‘a great something else’, which engenders a feeling of contractual and covenanted respect.

Isn’t this the song we surely wish to sing between us?

It is through vital and relevant service that we develop. The ‘bicycle teaches us how to ride it’. Reciprocal and mutually causative service in the light of hope for the future is…the ‘bicycle’.

To the parents and teachers of Ma’ale Tzvia and The Central Area, we say thank you for inviting us; thank you for attending, for supporting, for such wonderful attitudes, warmth and humor…But thank you most for the children in your care and cover. It is a love that has created an opening for the light of the future to enter.