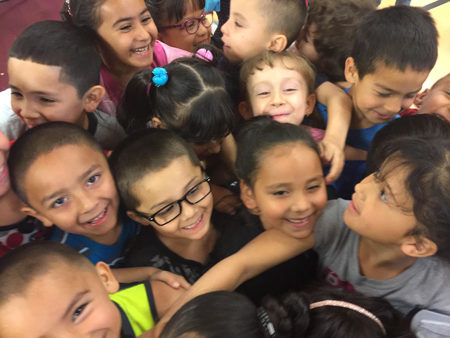 This past Fall we taught in three elementary schools in Española. As we entered our Friday school, the sonorous Hawaiian voice of Israel Kamakwiwo’ole singing Somewhere Over the Rainbow echoed through the halls of the entire school. We walked into our first classroom to see a dozen Kindergarten students and their teacher dressed in pink tops. We were greeted with teary eyes. One of their classmates had died.

The story behind the loss of this child itself was very sad. She had been missing for four days before her body was discovered in the Rio Grande. The circumstances of her death were unclear. The police were investigating. Hard to fathom tragedies like this were not new to this community, but to lose a sweet little five-year-old girl to neglect and abuse sent waves of grief and dismay through the entire city.

We felt close to it because we had just started working with her classroom. It is impossible not to have a special affection for the children of Española Valley. On that Friday, the principal asked, on a moment’s notice, if we could sing a song for her school memorial ceremony. What song, what sentiment, what words can bring relief to a traumatized community, especially when mourning the inexplicable death of an innocent five-year-old?

I don’t know of any songs in English or Spanish that can touch this kind of grief. In the moment, the song I reached for and sang to start the ceremony fell short of the real need. In Africa, collective mourning is expressed through songs everyone knows…and they resonate deeply. It is hard to find such songs here. When the singing was over, her kinder classmates were asked to come out and say something into the microphone if they wanted to. They said things like “I loved her. She gave me gum!” and “She was my best friend.” “She was my second, no, third best friend.” “I really miss her.” “Where did she go?”

We have worked with her classroom (and 2 others) throughout the Fall months. She’s gone now. The children only occasionally bring her up. But at first, they were really struggling. Sometimes, especially in times of crisis, humans step forward with remarkable character and sensitivity. Their loving teachers and principal brought relief, warmth and comfort in every way they could reach for. Her memory was honored with photos, cards, flowers and balloons in the school entrance for many weeks. A tender “We miss you M—” was posted on the school marquis.

The subject of the loss of an innocent life was essentially left for every child to handle in their own way, modelled by the grownups in their lives. Platitudes like, “I’m sorry for your loss”, or “She’s in heaven now”, or even biblical verses or folk wisdoms, feel a little bit empty. Grief is only superficially relieved by well-meaning condolences. Trying to fill the loss doesn’t honor our humanity, nor does it allow a full-bodied process of bereavement. We are meant to feel the pain and bewilderment of absence. It’s ok to be at a loss for how to respond.

Death is sanitized in many cultures. Grappling with human frailty and mortality is a natural process, and yet it becomes suppressed, feared and avoided…tucked away. But not everywhere.

There are dignified examples of the human celebration of a life and the mystery of death all over the world. In every example, from Africa to Latin America, to India and Indonesia, to parts of the Middle East and Eurasia, and many other places and cultures, death is attended to as a transition, where the human spirit is meant to be released into its next possible journey and function.

We grieve because much of what the person has given us goes back to them at the point of death. And what we have given, planted and grown in the person comes back to us. It can be movingly, poignantly painful and instructive.

How we talk with young lives about death depends on their age and circumstance, of course. But whatever they witness and feel from the grownups and their community is everything. It needs to be honest and sincere. Children have the capacity to handle extraordinary depth of feeling.

The most comforting warmth is simply to be with them, to be nearby, to walk with them, to listen, to be silent, to be soft. And sometimes…to sing…

Weeks after her passing, we found a song that did touch a chord with the children and their teachers as a tribute to a young spirit’s light, entitled Farolito; and after struggling with the question of songs appropriate for the young in times of mourning, another song came into focus: Walk With Me.

Please share songs, stories or ceremonies you may know in respect to this subject.

In 1981, I lived in a small village called San Vicente de Azpitia, in the coastal desert of Peru. There were two deaths that occurred in the six months I lived there, both attended to with profound tenderness.

The first happened early on.

I felt comfortable wandering the village streets and pathways, playing the guitar in the evening. On this occasion, I was working on a bilingual song about an orphaned child’s longing to know their mother. The verses were beginning to flow nicely when I came upon a small adobe house with a single candle lit in the window. There were silhouettes of many people in the house, so I was curious.

I walked up to the front of the house and could see a couple dozen shoes neatly laid outside the entrance. The door opened and a beautiful man named Felix, who I had just met that morning, invited me to come in. I took off my shoes, leaned the guitar on the garden wall, and walked in.

The four walls of this room were lined with people sitting quietly in rickety folding chairs. Felix pointed to an open chair for me. As my eyes adjusted, I could see a tiny bundle of white cloth laid in the middle of the dirt floor. Felix then said to me, “We are accompanying this child who died in birth this morning, so that she has safe passage through the night.”

The atmosphere in that room was so soft, so still and respectful. These were the faces of kindness itself.

Felix stepped out after a long while and brought in the guitar. He handed it to me asking, “Puedes tocarnos una cancion, Pablo?” ~ Will you play us a song…?

Tentatively and tenderly warming into it, the new song wanted to be played and sung. Some other hand wrote that song intended for just that moment. It was uncanny. I will never forget the feeling in that tiny mud thatched house, and the look in the mother’s eyes. 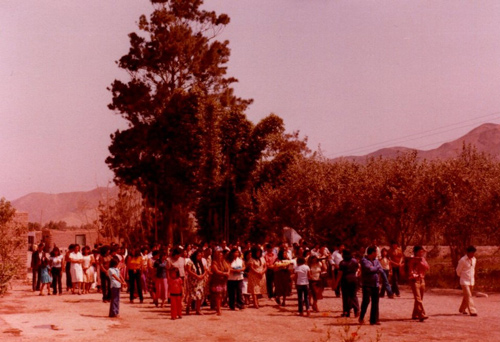 The second occasion was near the end of my time in Azpitia, this time shrouded in mystery. It was the death of a revered patriarch. Everyone in the village was invited to see him before his burial. So, I went to his home.

There was a long line of people leading up to and exiting the front door. Inside the front room, the old man was laid out on a table, dressed in a suit and tie, eyes closed with small rounded stones covering them. There was a faint sweet pungent odor in the room, strangely, and everyone was whispering prayers.

This was the first time I saw a dead body, close up. There were definitely multiple presences in the room. It seemed this man was not gone yet. And it seemed he had unseen company. So strange and unearthly was the feeling.

The next morning at the crack of dawn, the whole village, some 300 grownups and children, along with about 30 dogs, walked behind a flatbed truck with the body lying in the bed, shrouded in white cloth. Everyone was in their best clothes. It was utterly silent. I joined the procession near the middle as we walked 4 miles down the dirt road to the burial grounds outside the Catholic church in the next village down the valley.

The uncanny thing was just how silent this procession was. The atmosphere was intensely charged. But this time it was not soft. It was fearsome. I was told later that the ancestors were also in this procession, as guardians against anything that would interfere with this man’s funeral.

The burial was accompanied by prayers and ceremony from the catholic liturgy. The most striking thing was the wailing of the women at the end, all veiled in black. It sent chills. It was as if they were functionaries essential for the dispatch this man soul.

Then, with the last shovel-full of dirt over the body, it was over. He was gone. The solemn and oppressive atmosphere completely lifted and dispersed, and everyone walked home, talking quietly, as if released from enchantment, children able to be children again.