Every year since 2008, our company, Talking Hands Talking Feet, has received generous grants from the National Endowment for the Arts in support of our curriculum based performing arts programs in Santa Fe and Española schools in New Mexico, USA. 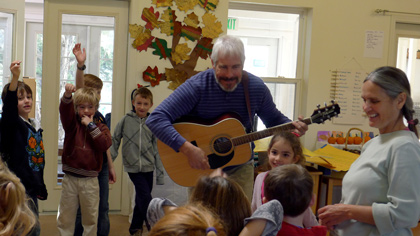 Here is the remarkable story behind it.

It began in 1996 in our Seattle living room with a group of friends who also had young children. We would often have family gatherings where we would play music and dance, sing songs and tell stories. The biggest challenge was finding compelling children songs that engaged the whole family and songs that opened doorways to new learning. So we started writing original songs with story and dance accompaniment. We soon realized it was a marvelous springboard of discovery into the natural worlds, the human body, language, geography, numbers and counting and the kaleidoscopic world of human beings. 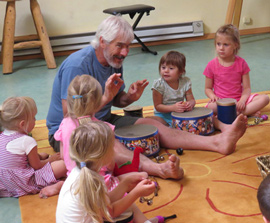 Our parent friends loved these songs. So, in September 1997, in response to their enthusiastic encouragement, we opened our home to the public and started music, movement and story workshops for parents and children every Saturday morning. We called it Talking Hands Talking Feet.

We have always believed in and practiced the arts as a vehicle for natural education. This was how we raised our sons. If you truly wish to learn something of value, give it a form of expression! Start with the most fundamental of human arts – music, rhythm, movement, language, symbol, story and song. To our ongoing wonder, delight and discovery, parents and their little ones couldn’t get enough of Talking Hands Talking Feet.

Thus it began. It steadily grew year by year. We created a record label and produced our first albums. We moved from Seattle to Boulder to Santa Fe, always experimenting and expanding what was becoming a substantial curriculum of arts integrated educational songs.

In 2005, many hundreds of family workshops later, our youngest son’s first grade teacher in Santa Fe, New Mexico asked us to help with an end of school year performance which involved orchestrating four classrooms in a songful extravaganza. It went so well that the following year the teachers asked us to do it again, this time with our own original songs and that we would be paid to do it! So, we developed our first thematic 12 week performing arts program for four 1st and 2nd grade classrooms called “In Tribute to The Earth”. This is how Talking Hands Talking Feet curriculum based performing arts programs were born. 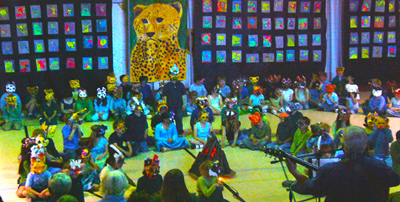 Since then, Talking Hands Talking Feet has received grants from the NEA, private donations and public-school funding to do a whole variety of original 12-week thematic performing arts programs in 24 public and private schools in New Mexico. We have also traveled to New York, Colorado and even to Israel to do summer camps.

The range of content has expanded to 160 songs with movement and story accompaniment including inspiring lesson plans that help teachers bring subjects alive. The songs cover a diverse range of themes with a spirit of discovery, compelling humor and humanity; and now have personally touched the lives of thousands of young students.

Our professional development workshops have inspired many teachers into this unique methodology. 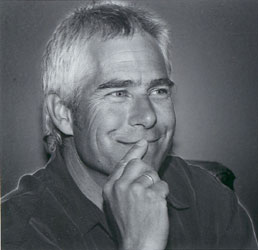 Paul A. Zeir is co-founder and Creative Director of Talking Hands Talking Feet since 1997. He teaches curriculum content, composes, performs and orchestrates the music theater aspect of the programs.

Human development and education combined with a love of the arts are Paul’s background and training. He has spent many years living with and visiting indigenous communities in South, Central and North America and South Africa where he discovered the rich tapestry of natural human theater endemic to native peoples around the world.

He studied at Northern Arizona University, Colorado University, the Global Academy of the Institute of Cultural Affairs and continues vital research to this day. His passion for Arts Integrated Education stems from his belief that true education cannot be separate from the arts and a deep understanding of the human potential.

The development of Talking Hands Talking Feet began for Paul with becoming a father in 1995. His primary wish as a parent was to provide a rich and loving multi-layered learning ecology in the home and family life which included natural human theater arts. Thus, the adventure into children’s education began! 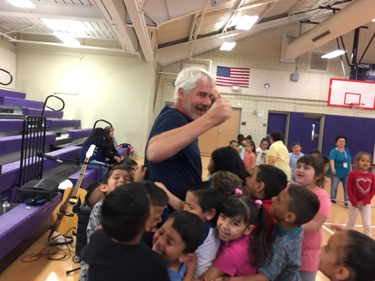 With great passion and a love and gift for engaging children he has developed this valuable body of work furthering Arts Integrated Education internationally. 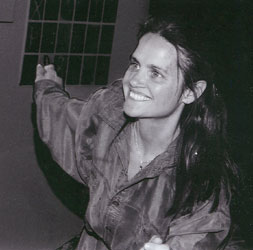 Melanie Zeir is co-founder and Program Director of Talking Hands Talking Feet since 1997. She creates and orchestrates the movement aspect of the program along with the technical side of things: webmaster, audio and video engineer. Her studies in movement disciplines encompass Ballet, Modern Dance, Tap, Jazz, Creative Dance, Yoga, Tai Chi and Electrobics. She is certified by the S.A.D.T.A (South African Dancing Teachers Association), Naropa University in Boulder Colorado and Electrobics International.

Through creative movement she composes dance programs to enhance children’s development. Important connections are made through coordination, rhythm, left/right brain cross over work and responsive choreography. Her motive is to instill confidence so that each child can express themselves with ease and joy, deepening the holistic learning process.

She grew up in South Africa. The nature and way of Africa and her people was a compelling influence upon her youth. Dance, rhythm and music are heart and soul to Africa. Thus, her education and training came very naturally. It is expressed in the way she engages children and grown-ups in movement. Passion and grace, natural intelligence and talent inform her arts; and it transfers to others so easily.

She collaborates with a network of educators to integrate Talking Hands Talking Feet programs within the curriculum needs of different school environments.