Talking Hands Talking Feet, the teaching artistry of Songs To Educate, champions bilingual learning through many of their original songs as a means of enhancing neural development and encouraging multi-cultural diversity. It is especially true of their “Human Body School” performing arts program, where human anatomy vocabulary is enhanced by both the English and Latin origins of words. The “Human Body School” 12 week program, currently underway at Nava Elementary School in Santa Fe, will culminate with a community performance in mid May.

It has been proven that bilingual and multi lingual learning environments encourage neurological development.

A very effective way to teach a foreign language is through song. It bypasses the front brain tendency to switch back and forth between one’s “home language” in comparison translation to the foreign language. Singing allows greater assimilation of the feeling, cadences and neurological patterns of a new language.

The THTF song, “Get To Know Your Body” travels through the major body organs plus the bones, blood and nerves, alternating between Spanish and English. It’s a fun way to learn and compare human body vocabulary. For example, the beautiful word for heart in Spanish, “Corazon”, evokes other latin based meanings in words like – courage, courtship, court… Getting to the “heart of the matter”, is to get to the “core” of something.

The word for “body” in Spanish is “cuerpo”, which extends to words like “incorporate”, compared to the Anglo, “embody”. Also military usages like, the Marine “Corps” and “corporal”…. 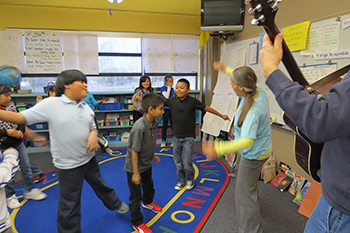 Another example is in teaching the Talking Hands Talking Feet song “Human Bodyland”. The song is all about body idioms, like “off the top of my head” or “play it by ear”.

When teaching “Human Bodyland” to native Spanish speakers, there is a lot of humor. First of all, idioms are idiomatic to their home language. They don’t always translate direct. When asked what they think the phrase “Keep your nose clean” means, there’s no equivalent in Spanish, so they think the obvious. Equating “mind your own business” with a clean nose, seems very funny to 2nd grade Spanish speakers.

Translation between languages can enhance language usage. The English word “Blood” is non-evocative compared to the Spanish equivalent “Sangre”, which leads to many Latin based expressions. The English word “sanguine” for example, means to be cheerfully optimistic, hopeful or confident or to have a ruddy complexion. 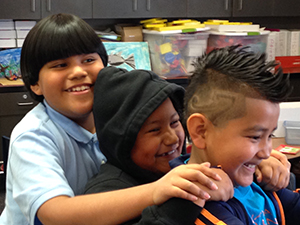 Songs To Educate is certainly sanguine about its meaningful arts integrated approach to education. Children who learn the human body and numerous other subjects through this creative method are given a “leg up” and a “helping hand” so they have the “guts” and the “backbone” to “head into” the future with “good hearts” and confidence.

166. Your Face Your Hands Your Voice